Get the low down on Oracle Database Standard Edition 2

Oracle recently announced the release of Oracle Database Standard Edition 2.  Full details are not available at this time but here’s what we know so far.

Oracle Database is available in a number of editions: Standard Edition (DBSE), Standard Edition One (DBSE1) and Enterprise Edition (EE) being the most well-known. DBSE and DBSE1 are effectively the same product, however DBSE1 is limited to servers which have a capacity of two sockets whereas DBSE has a four-socket capacity limit.

The advantages of DBSE/DBSE1 are significantly cheaper prices; sometimes well over 90% cheaper – a four processor by 10 core (40 physical cores) server would cost 50k with DBEE and 0k with DBSE. However, the downside is that none of the Oracle database extra cost options can be licensed with these editions, as well as some useful ‘enterprise’ features such as DataGuard and Flashback.

The announcement of DBSE2, which will be available as 12.1.0.2, likely means a limit on the amount of processing power available to ‘non-enterprise’ workloads – modern day processors are available in 15-core versions meaning SE can be run on 60 physical cores!

What do we know to date?

The table below summarises the known differences between editions at this time: 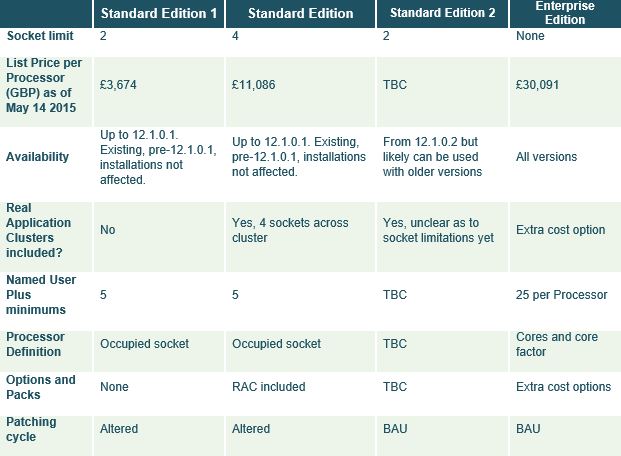 It is expected that DBSE2 will be placed between DBSE1 and DBSE and therefore pricing is likely to reflect this. There are a number of questions outstanding about what DBSE2 will mean for existing DBSE/DBSE1 customers, such as migration costs and implications, Named User Plus minimums, socket definition etc. We will issue a further update once more information is made available.