Version 1 Demonstrating the ‘Art of Possible’ at OpenWorld 2019

Oracle OpenWorld is an annual Oracle convention for business decision-makers, IT management, and line-of-business end users to learn about trusted products and up-and-coming technologies.

Version 1 representatives were invited to Oracle OpenWorld in San Francisco to attend exclusive Oracle briefings and have been participating in talks and sessions throughout the week. The following blog post covers our highlights and key takeaways from the event to date.

On the morning of October 18th 2019, Karl O’Connell from ICBF and John Bolger from Version 1 presented at Oracle OpenWorld in San Francisco to showcase that Ireland is currently running the largest livestock genomics project in the world. 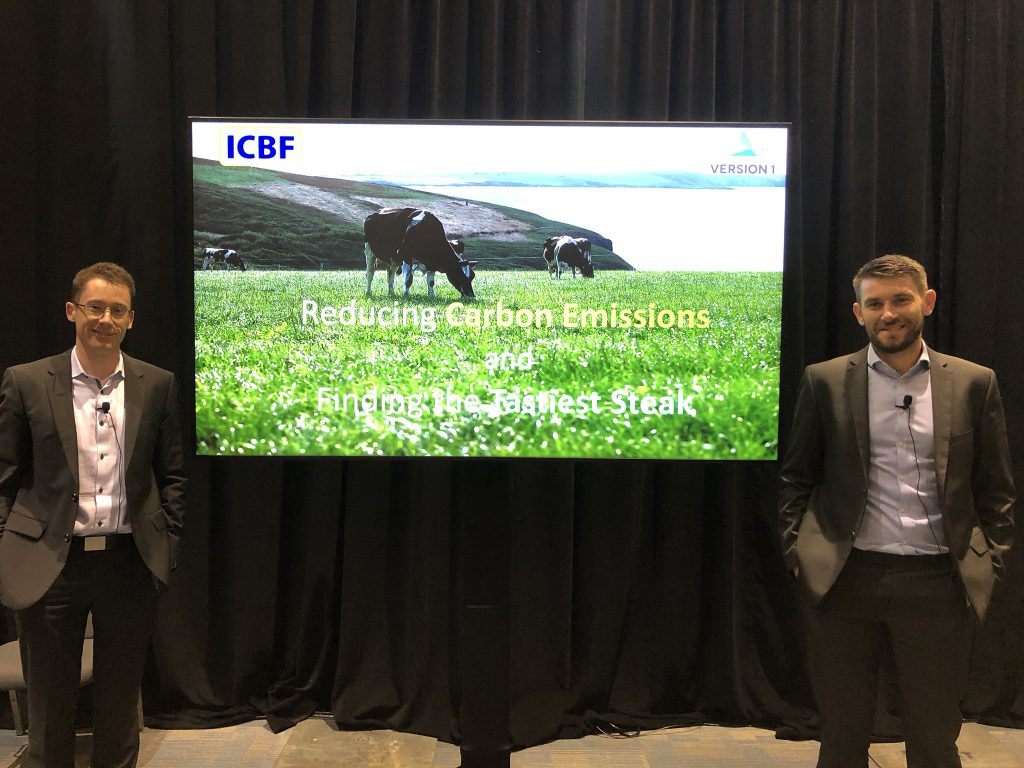 In this session, Karl O’ Connell and John Bolger explained to the audience how Oracle Blockchain is enabling traceability from farm to fork at ICBF, helping consumers identify the most sustainable agricultural products. Attendees also learned how Ireland is becoming a global leader in the Agtech Big Data evolution by combining the power of the Oracle Database, Oracle Blockchain, and genomics. 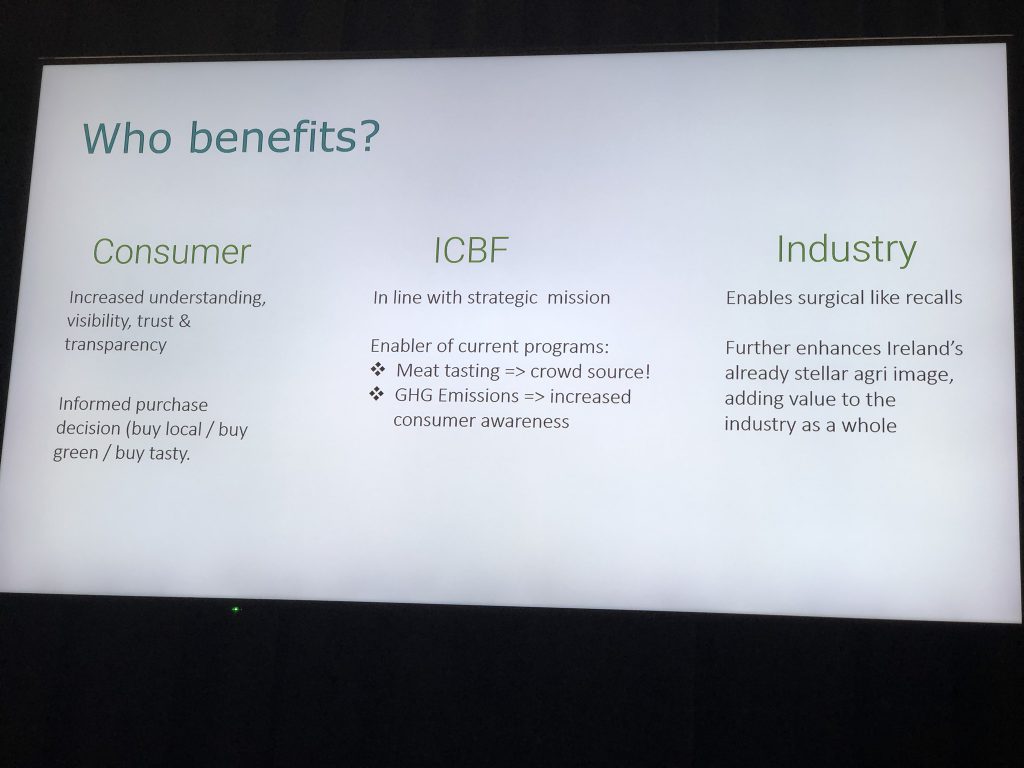 Karl O’Connell and John Bolger elaborated further on this topic when speaking with Jess Twentyman from Diginomica at OpenWorld this week. Karl O’Connell explained how ICBF has worked with Version 1 to build a proof-of-concept (POC) Blockchain that brings together information from shoppers, retailers and farmers, in order to explore how farmers can best produce the steaks that shoppers want to buy and eat. O’Connell explained:

When you buy a steak from the supermarket, it may be good or it may not – but you, as the consumer, are the only person who can tell us that. And since there’s a strong genetic component to juiciness and tenderness and tastiness, if we can find a way to get more information from retailers and consumers to build that dataset, that’s information that the farmers who use our data need to know.

John Bolger explained the focus that Version 1 has placed on exploring the real business benefits that Blockchain may hold for customers.

The problem I have with Blockchain is that people talk about it in very abstract ways. This pilot has given Version 1 a concrete example of what it might look like, how it might work, and what the business benefits might be. Where we see the value of this is that ICBF has all this data and the industry can use it, but the consumer doesn’t have that visibility to see where their meat came from, how sustainably it was farmed and so on. Blockchain, we decided, could provide that ‘farm to fork’ visibility.

“Moving ERP to the Cloud, Blockchain, Cattle and Brexit.”

Ian Murphy from the Enterprise Times spoke to John Bolger and Nic Wood from Version 1 at Oracle Openworld in a podcast that covers all things Oracle, ERP, Cloud and Innovation. Ian Murphy was particularly interested in what Version 1 was seeing from a customer perspective. For example:

During this year’s OpenWorld keynote, Larry Ellison showcased Oracle Autonomous Linux, which has been billed as the world’s first autonomous operating system. The new operating system is capable of scaling, tuning and patching itself while running, with Ellison suggesting that the lack of human interaction will allow IT staff to improve their productivity, security and downtime.

According to Oracle, existing Cloud Infrastructure customers can access Oracle Autonomous Linux at no extra cost. The company also introduced Oracle OS Management Service, a highly available Oracle Cloud Infrastructure component which can be used to monitor and control systems, regardless of operating system. The OS Management Service will also enable users to automate capabilities to execute common management tasks for Linux systems.

A free trial is also included, which includes $300 worth in credits for 30 days for users to experiment with Oracle services that are not included in the Always Free tier. The introduction of this tier is noteworthy as Oracle claims it offers more compute and storage than other cloud-based provider’s free trials, with no limited time restrictions.

Oracle and VMWare announced a partnership which aims to help mutual customers coordinate their Cloud Migration efforts. Customers will be able to support their Hybrid Cloud strategies by running VMWare Cloud Foundation on Oracle Cloud Infrastructure, allowing customers to migrate VMware Vsphere workloads to Oracle’s Generation 2 Cloud Infrastructure without modifications. Oracle also announced that they will provide technical support for Oracle software running in VMware environments, ending tensions which have lasted over the last two decades.

As more of our customers make the move to cloud, they’re looking for a superior VMware experience. We are excited that Oracle Cloud customers will be able to run VMware workloads in Oracle Cloud and retain VMware administrative access,” said Don Johnson, executive vice president, Oracle Cloud Infrastructure. “This is made possible by Layer 2 networking in the cloud and our bare metal service. Customers will be able to extend existing VMware investments, processes, and tools while benefitting from the security and performance of Oracle Cloud Infrastructure.

Following this announcement, Version 1 will be actively exploring the newly expanded capabilities for our customers who wish to run VMware workloads in Oracle Cloud.

Oracle’s partnership with Microsoft has also progressed, with Oracle expanding its regions interconnected with Microsoft Azure. The regions are expanding to US West, Asia and Europe within the next few months, in both commercial and government regions. Oracle’s Digital Assistant will also be integrated in Microsoft Teams, allowing enterprise customers to access Oracle Cloud Applications through an AI experience in Teams.

Stated to be the “fastest database machine in the world”, the new Oracle Exadata features the use of Intel’s Optane DC persistent memory and second-generation Xeon Scalable processors to accelerate performance for Oracle Autonomous Database. The Exadata X8M integrates new technologies, including remote direct memory access over Converged Ethernet (RoCE) as the high-bandwidth low-latency network fabric. Oracle have said that the Exadata X8M system can deliver 2.5x more I/Os and 10x lower I/O latency compared to the previous release. Two configurations of the system were shown, the X8M-2 and the X8M-8, with the X8M-8 using large-scale 8-socket SMP servers instead of the 2-socket servers in X8M-2. Check out this video to take a deep dive into new Exadata X8M persistent memory and RoCE capabilities with Oracle’s EVP Juan Loaiza.

Stay tuned for more updates from Version 1 from Oracle OpenWorld on LinkedIn and Twitter.

The go-to partner for Oracle E-Business Suite, JD Edwards, Peoplesoft and Oracle Cloud Applications. We are committed to continuous innovation in Oracle applications and helping customers digitally transform through the next generation of Cloud applications. Get in touch with Version 1 to explore how Innovation could benefit your business.