AWS re:Invent 2019 took place last week, bringing together more than 65,000 attendees in Las Vegas. A learning conference hosted by Amazon Web Services for the global cloud computing community, the event featured keynote announcements, training and certification opportunities, access to more than 2,500 technical sessions, a partner expo, after-hours events, and more for visitors. The following blog post will focus on our key takeaways and highlights from the event.

On the 4th December, Version 1 announced its intention and capabilities to support AWS Outposts, a fully managed and configurable compute and storage racks built with AWS-designed hardware that allows customers to run compute and storage on-premises, while seamlessly connecting to AWS’s broad array of services in the cloud. As an AWS Outposts Partner, Version 1 is able to help AWS customers overcome challenges that exist due to managing and supporting infrastructures both on-premises and cloud environments and deliver positive outcomes at scale.

Read more about Version 1’s intention and capabilities to support AWS Outposts. A Premier Consulting Partner in the Amazon Web Services (AWS) Partner Network (APN), Version 1 specialises in the migration, optimisation, and running of complex enterprise workloads in the cloud. 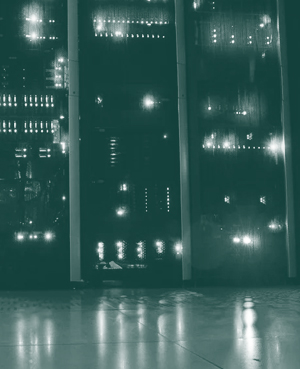 Andy Jassy, CEO of AWS delivered Tuesday’s Keynote, with a key focus on transformation. Andy highlighted that companies need to transform to stay ahead of the game, to keep market share and to grow in a competitive environment. With 97% of IT spend still on-premise, there is still a huge market for Cloud to capture and take advantage of. Business leaders need to drive transformation, with Andy calling out the four differentiators below.

David Solomon, CEO of Goldman Sachs was called up to the stage to talk about the partnership between AWS and Goldman Sachs.

David talked about the credit card platform built on AWS, that underpinned the launch of the Apple Card. Goldman Sachs will migrate their Marquee services to AWS next year, which includes tools that allow customers to analyze risk, compare prices and use the bank’s services for their needs. Hans Vesper, CEO of Verizon also spoke about the future of 5G and the benefits and future of the technology. The launch of a new AWS edge service on the 5G network, AWS Wavelength was also highlighted, with Wavelength able to deliver ultra-low latency applications on 5G to mobile and IoT customers.

Several AWS launches were announced during Andy’s keynote, with a few highlights below:

AWS revealed its second-generation processor to be used in its servers and datacentres, described by AWS as delivering a major leap in performance and capabilities over first-generation AWS Graviton processors. Compared to the A1 instances, the new Graviton 2 powered instance can deliver up to 7x the performance, 2x the floating-point performance, and 5x faster memory access.

AWS introduced a new enterprise search product to rival existing offerings, Kendra. Kendra is powered by machine learning and uses natural language queries for an intuitive search experience. Kendra is highly accurate, easy to use and allows end-users to easily find the information they need. Users can ask questions like “How long is maternity leave?” and get a specific answer such as “14 weeks”, or “How do I configure my VPN?” and get a specific passage extracted from a document describing the process.

AWS also announced the general availability of AWS Outposts, fully managed and configurable compute and storage racks built with AWS-designed hardware that allow customers to run compute and storage on-premises, while seamlessly connecting to AWS’s broad array of services in the cloud.

Customers are excited about AWS Outposts because it gives them on-premises access to AWS compute, storage, and database with the same APIs, control plane, tools, and hardware as they get in AWS Regions. But, for some of our customers, they either don’t have an on-premises data center or want to get rid of their local data center, but still have a need for some of their workloads to run locally given latency requirements

The re:Invented supercomputer will feature AWS custom network switches and network software, improved security, reliability and operational performance and cost less. Peter highlighted a “to-do” list that AWS is covering to reinvent the supercomputer, stating that a key problem with physical supercomputers is that they’re custom-built, which is very expensive and can take several years to build and procure. Running and scaling High-performance computing (HPC) workloads in the cloud will require high-performance, low-latency networks, with AWS hoping to increase accessibility to supercomputers for all users. 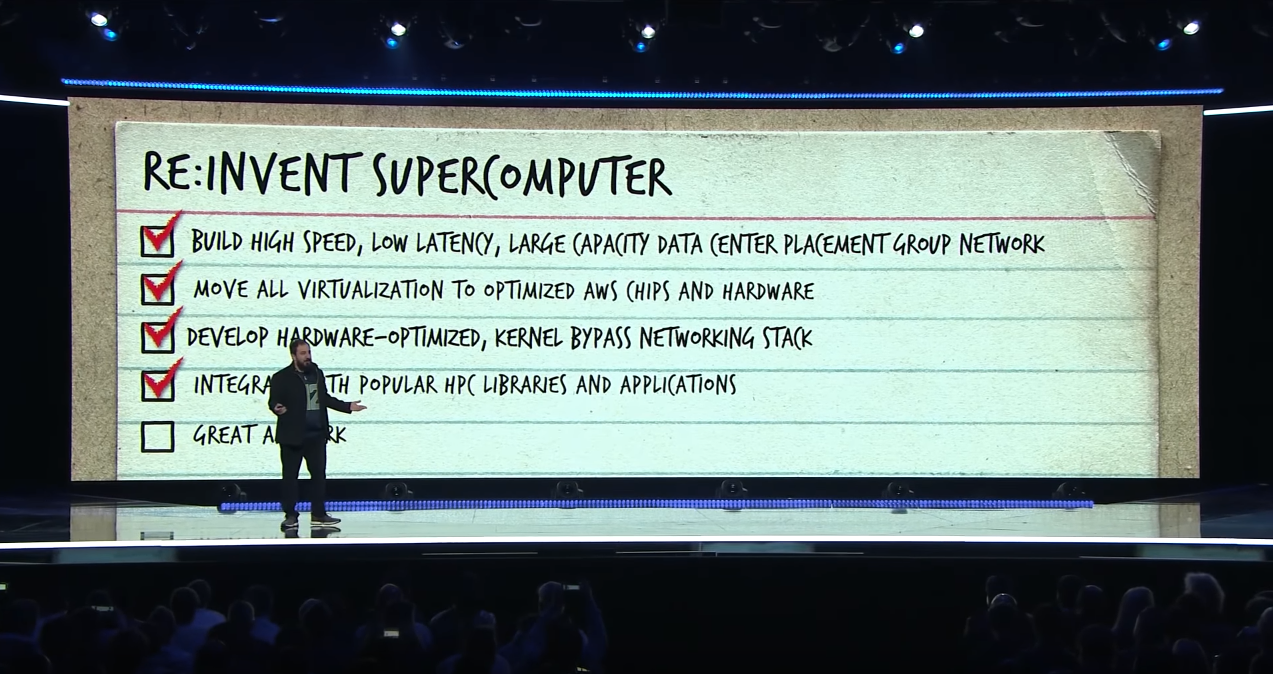 Rob Smedley, Technical Consultant at F1 (Formula One Group) took to the stage to reveal that AWS and the Formula One Group have completed a Computational Fluid Dynamics (CFD) project to simulate the aerodynamics of cars while racing. Creating the “next generation” of race cars, the Formula One Group ran detailed simulations on AWS comprised of over 550 million data points, that model the impact of a car’s aerodynamic effect on another close proximity car. 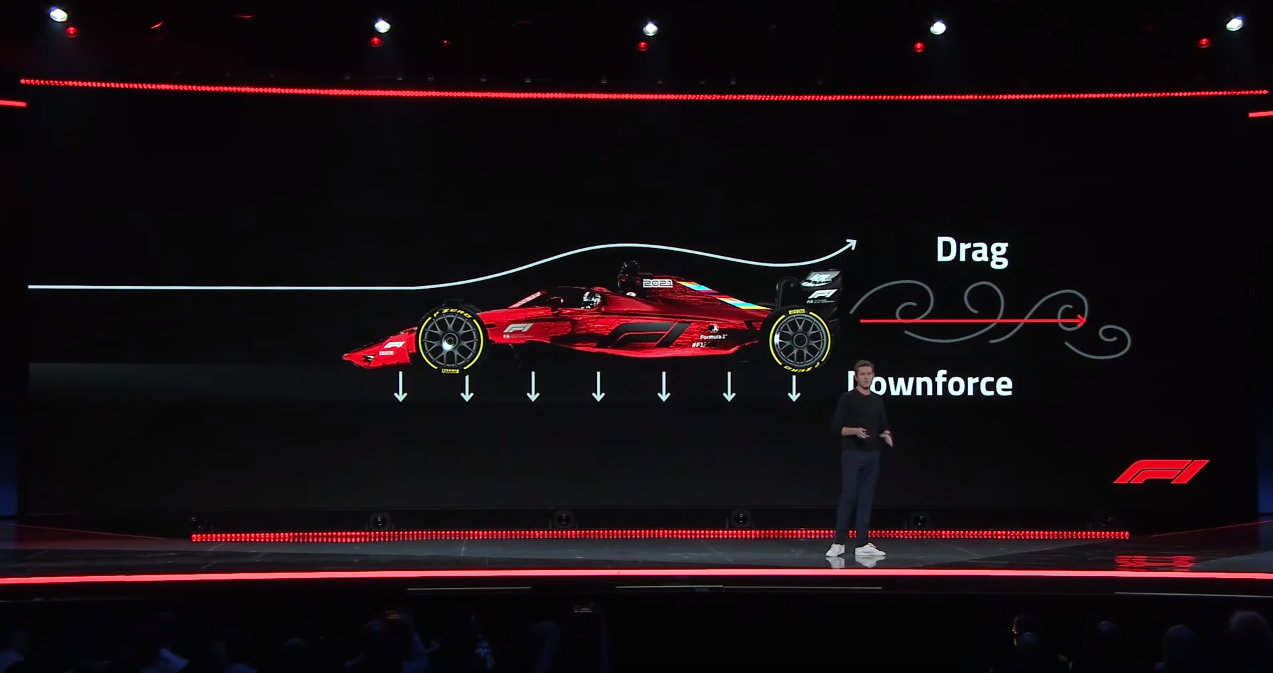 The Formula One Group said it was able to reduce the average run time of simulations by 70% on AWS’ platform, from 60 hours to 18. Running for 6 months, the project used Amazon Elastic Compute Cloud (Amazon EC2) c5n instances and was noted as “one of the most revolutionary projects in the history of Formula 1 aerodynamics” by Pat Symonds, F1 Chief Technical Officer. As a result, this project has informed and resulted in the car design set to be used in the 2021 racing season.

Taking a partner focus on Wednesday, Doug Yeum, Head of AWS Worldwide Channels and Alliances at AWS announced the APN Global Startup Program, a program to help startups and early-stage companies with enterprise products better-leverage the cloud provider’s benefits, including its go-to-market efforts. The APN Global Startup Program will have a dedicated AWS team focused on ensuring selected startups with Series A or B funding from institutional investors get the right level of AWS support to grow more quickly. AWS is targeting startups in the pre-initial public offering stage with enterprise solutions ready to be deployed.

With the APN Global Startup Program, selected startups can:

Find out more about the APN Global Startup Program here. 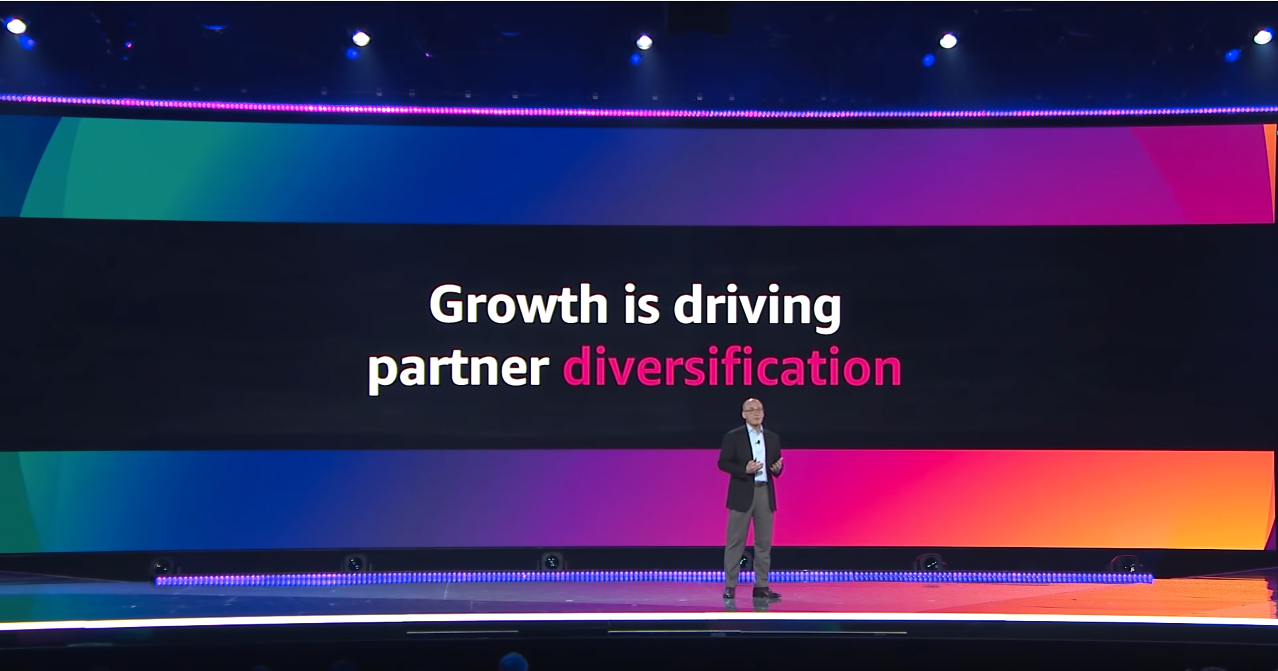 The final keynote of AWS re:Invent 2019 was delivered by Werner Vogels, Chief Technology Officer of Amazon.com. Werner gave a deep insight into how AWS has reinvented virtualisation with the AWS Nitro System. Demonstrating the benefits of AWS Nitro over classic virtualisation, security enhancements were discussed, such as encryption without performance loss and preventing guest instances from comprising each other.

Nitro became a base for innovation

Werner also said that Nitro allowed AWS to do lots of things they couldn’t before, becoming a base for innovation. As the Nitro platform supports the latest and greatest AWS compute environments, users can deliver live software updates, from patches to new hypervisors, and create new systems like the Outposts on-premises AWS service. This base of innovation led to the creation of AWS Firecracker,  a new virtualization technology that can launch lightweight micro-virtual machines (microVMs) in non-virtualized environments in a fraction of a second, taking advantage of the security and workload isolation provided by traditional VMs and the resource efficiency that comes along with containers. Overall, this has assisted with increasing the efficiency of AWS Fargate services that powers container workloads. 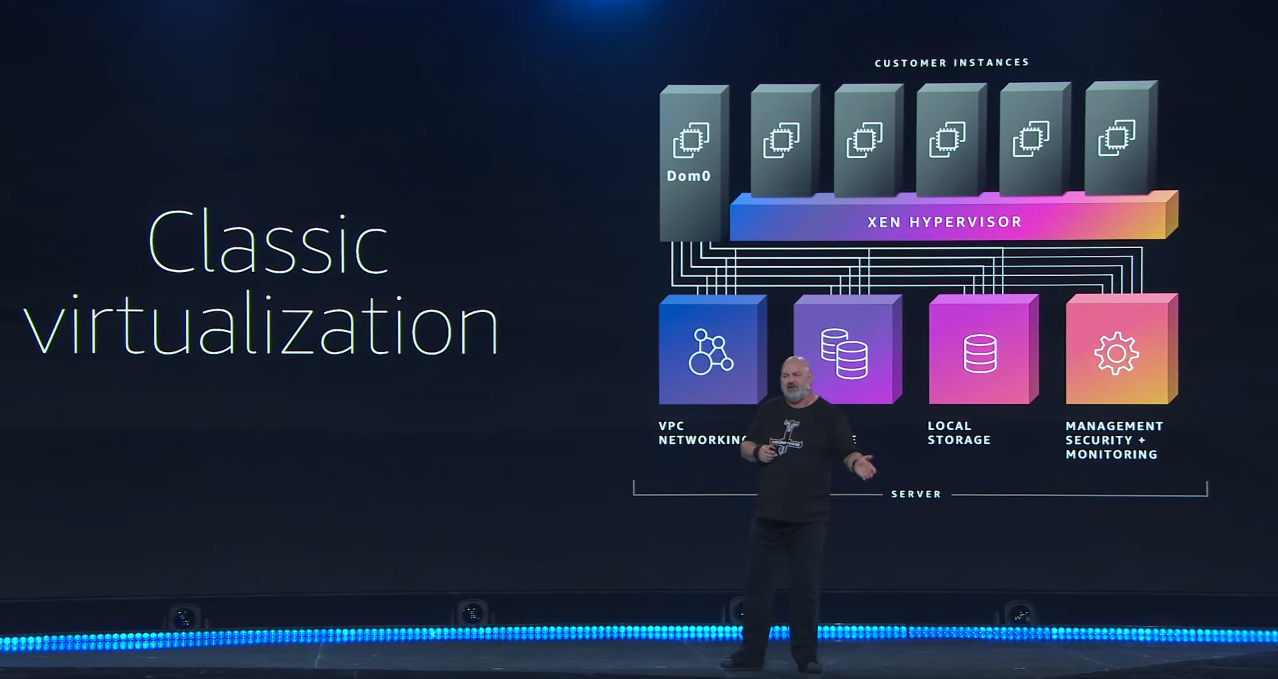 Version 1 is a leader in Enterprise Cloud services and was one of the first AWS Consulting Partners in Europe. We are an AWS Premier Partner and specialise in migrating and running complex enterprise workloads in Public Cloud. We are an Oracle Platinum partner, with an unrivalled specialisation list on all aspects of the Oracle stack, including databases, JD Edwards, PeopleSoft and E-Business Suite. We are trusted by global brands to deliver IT services and solutions which drive customer success. Our team works closely with AWS to help our customers navigate the rapidly changing world of IT.

Talk to us about AWS Outposts